Create an Account - Increase your productivity, customize your experience, and engage in information you care about.

Williams Lake History
Williams Lake is named in honor of Secwepemc chief William. The story of Williams Lake began in 1860 during the Cariboo Gold Rush when Gold Commissioner Philip Henry Nind and Constable William Pinchbeck arrived from Victoria to organize a local government and maintain law and order.

At the time, two pack trails led to the goldfields, one from the Douglas Road and another trail through the Fraser Canyon. Both met at Williams Lake, which made it a good choice for settlers and merchants. By 1861, Commissioner Nind had built a government house and had requested the funds to build a jail. With the center of local government being at Williams Lake, the miners and businessmen all had to travel there to conduct their business and soon the town had a post office, a courthouse, a roadhouse and the jail that Nind had requested. 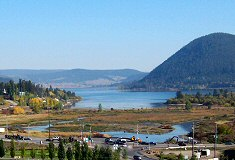 Growth of a City
Williams Lake later became a hub for forestry, mining and transportation with the construction of the Pacific Great Eastern Railway, later BC Rail and now CN Rail.

Williams Lake hosts the annual Williams Lake Stampede, which takes place over the Canada Day long weekend. It is also the home town of Rick Hansen, the Canadian paraplegic athlete and activist for people with spinal cord injuries, who became famous during his fundraising Man in Motion world tour.